A guide to Winter Rabbit Hunting – From beginners to all

In winter hunting, rabbit is one of the small game animals that are most hunter’s favorite. Winter rabbit has its advantages and disadvantages. Hunters always have queries in regard to how they can know more about winter rabbit hunting, improve their hunting skills, and hunt more rabbits in a day. Check out the following Frequently Asked Questions (FAQs) and answers. Hopefully utilizing that info will improve your hunting experience. 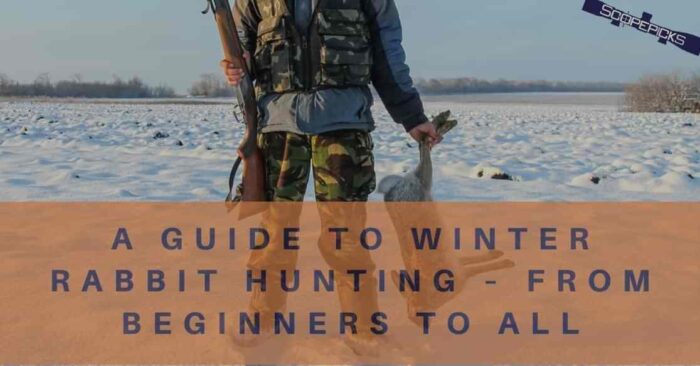 Why rabbit season is in the winter?

There are several reasons when winter is considered as rabbit season. Rabbit like cottontails is easily visible in the white snow and thus winter gives your rabbit hunting experience easy, fun and exciting. Rabbit like Snowshoe hares can be difficult to spot on in the white snow because they have white pelt but eventually they can be spotted though because they are comparatively large in size. Snowshoe produce more meat and so preferable by the hunters.

Some prefer winter rabbit hunting because the cold killed off rabbit infestation with fleas, sickness, diseases, or parasites. But this problem can also be solved if you, after killing (hunting) the rabbits, let their body cool down for several hours. Since fleas need a warm body, so cooling down the rabbits dead bodies will cause it free from fleas.

Though a lot of people doesn’t follow this cultures. They hunt and eat rabbits all year round. Besides, in most States Rabbits are not classed as game, so legally there is no hunting season for it. For example, Texas authority declared rabbit to be non-game and they can be legally hunted year round 24/7 with any legal firearm.

Moreover, law also dictates that all land owners have a duty to control the rabbit population so hunting season throughout the year round.

In some States there are rabbit hunting seasons fixed by game, wildlife and hunting authorities. They do that to increase rabbit population in those particular areas.

If you want to learn about gun scope and rifle scope you can read this articles:

What happens to rabbits in the winter?

In winter the rabbits are weary from being hunted by humans and other animal predators like house cats and bobcats on the ground and by hawks, owls and other feathered predators from the sky.

The rabbits make creative hiding place to hide in winter because there is a lot of lacking of vegetative covering during winter. Some rabbits change color to blend in white and gray winter landscape. In winter, Rabbits also stay put and do only necessary movement in cold weather to conserve energy.

What do rabbits eat in the winter time?

In winter, rabbit’s diet routine changes. Natural vegetation food supply run out as consumed by other rabbit or wild animals. Plants like clover, tender young plants, berries and vegetables will no more or difficult to find because of snow. In such rough weather, wild rabbits generally eat woody plant parts including the birch, willow, oak trees, twigs, bark and buds of trees and bushes.

Rabbits sometimes also eat snails, moths or other insects. They are cecotropes in nature so they eat their own feces.

In winter, when you think about your pet rabbits you must keep the same diet what they use to have all year round but the consumption quantity will differ. In cold weather, rabbits will normally consume more Pet food to gain more fat which eventually keep them warm. You must feed your rabbits the same amount of quality pellets, vegetables and fruits as they use to have all year round. You make sure your rabbit’s water has not been frozen or become too cold for it to drink.

What time of year are rabbits most active?

Since rabbits are simple prey for owls, hawks, eagles, falcons, and wild dogs, they apparently less active during full moon because in full moon light predators can easily spot them.

Rabbits are crepuscular in nature. It means they are mostly active at dusk and dawn.

What time do rabbits come out at night?

Rabbits sleeps in day, around 6 to 8 hours per day. As a crepuscular animal Rabbits mainly come out during sunset and sunrise. Since rabbits are nocturnal in nature, their favorite playtime is night and they generally come out at night around 8 p.m. They do that because they sleep hours in day and awake at night. So, do rabbits sleep at night? The answer is no.

Are rabbits more active at night?

Yes, they are more active at night. As mentioned earlier, Rabbits as nocturnal game animal sleeps in day for hours and play at night in their den or in pet home. Wild rabbits come out in sun down and first light just to be safe from predators.

Can rabbit survive in cold weather?

Rabbits are naturally built in a way that they can survive in cold weather. In cold season often rabbit’s (both wild and domestic) energy level increases.

The rabbits are most playful and cheerful in the winter times. So if you ask me, Do rabbits prefer warm or cold? I think they like the winter most.

These furry animal can be found all around the chilly parts of the world. They may look cute but they are tough in rough cold weather because of their natural thick furry coats in their body and fur pads on their feet. So, Do rabbits get cold at night? Well, not really.

What is the best weather for rabbit hunting?

More frequently hunters have queries like What months can you hunt rabbits? Well, rabbit season generally exists from early October to late February every year. Though in some States (for example- New York) the season extends till the Mid March and in some States the season even starts in early July (for example- California). In some states you are permitted to hunt rabbits all year round. For example in California, you can hunt Jackrabbits all year round.

Some prefers hunting in snow in compare to early season because in winter you can track rabbits foot step in the snow. Moreover, in extreme cold weather rabbits are bound to take shelter from the rough weather, that makes them simple to find and less likely to disappear in the wild.

Where is the best place to hunt rabbits?

You must know that, depending on the kind of rabbits, these rabbits can be found various places. Generally top locations in finding Rabbits is places with highly dense cover. You can find cottontails and swamp rabbits in gnarly tangles of briars, thorns, brush piles, honeysuckle patches, fallen treetops, cane brakes and other forest cover. They look for these places to hide because coyotes, foxes and birds of prey hardly reach them in those places.

Furthermore, deserted estates, old logs and dead trees, mainly those where the trunk is still rooted providing food for skimming rabbits is also great places to look for.

Rabbits stay tight in those hiding places unless almost stepped on to them or evicted by a rabbit dog. If you have good rabbit dogs, you will have high chance of killing more rabbits.

In winter hunting, when the ground is covered with snow, search for rabbit tracks that lead to good hiding places and reveal no sign of leaving. Then hunt the hiding places around thoroughly.

Are rabbits less active in winter?

No, Rabbits are not less active in the winter. They are not uncomfortable in cold weather so they don’t need to hibernate. They regularly look for food sources all over the winter to remain warm and alive.

These rabbits are not generally visible in winter because they are solely active on dusk and dawn. They come out this time because the weather is gentle and less light outside which eventually decreases their possibilities of being hunted by a predator.

Do wild rabbits have babies in the winter?

Yes, wild rabbits have babies in the winter. In general, rabbits breeding season is in late fall. When the temperature falls they start to breed from early October to December. In the off-season they avoid mating with each other and blissfully coexist without brawling.

But some research showed that around 30 percent of Cottontail rabbits survive winter. It may seem less but cottontail rabbits breed February-September and their breeding rate is so high. A female rabbit can make up to 6 litters per year with 1-8 babies per litter.

Do rabbits need light at night?

Generally they don’t need extra light except natural light. But if you keep your house rabbits in a dark room, you may put a light in the room or, somehow facilitate light from other room or outside source (indirect light source). This dim light may comfort them. The house rabbits doesn’t need a bright up above light. You rather put the light outside their hutch.

Since by nature Rabbits are crepuscular, their vision is pretty good in dim light situations. The wild rabbits generally doesn’t require night light, their moon light is good enough for them.

However, rabbits cannot see in pitch black conditions. So, rabbits still need some lights to see in night. But remember, light source doesn’t have to be high voltage since it can make rabbits feel uncomfortable.

Well, I hope the above questions and answers provide you enough info about winter rabbit hunting and to start your winter hunting journey. Among hunting small game animals in winter, rabbit hunting is always the most hunter’s preference. If you still lack some confidence check out this article.