What is the first thing you think of when you hear of a zombie invasion? Having the power to kill as many as possible right?  With a wide range of Nerf zombie strike line of guns, you will get to do the job but will require two hands to get as many as possible. However, the Nerf zombie strike slingfire will allow you to have the ultimate battle of zombie versus cowboy by using one hand to fire, reload and repeat.

If you are looking for another sniper rifle for fun then you can check out the list in here: Best Nerf Sniper 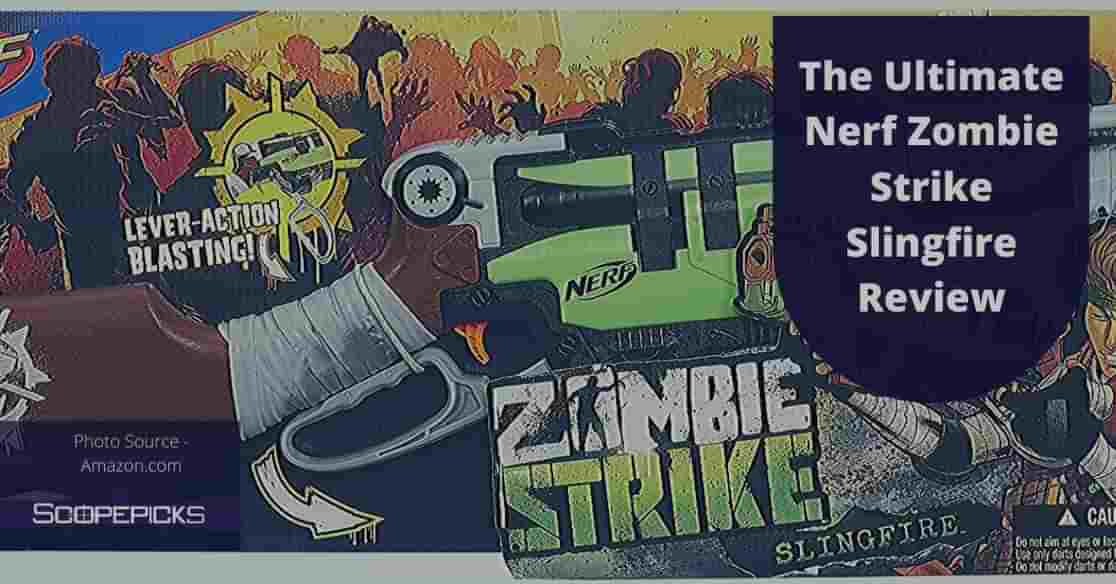 The Nerf zombie strike slingfire is comes with some neon green prevails with a brown handle as well as black and orange accents. It features a zombie logo on its handle to give it a bad boy look. So is the Nerf slingfire any good? Well, it comes with a number of features which include the following.

With its tactical rails, you can get to add several accessories to enhance the performance of the Nerf zombie strike slingfire blaster. It is also made from some of the best high quality materials which are not only durable but also safe. You will not only get a gun that is meant for all ages including kids as young as 8 years, but you will also get one that will serve its purpose for a very long time.

Aside from that, this Nerf gun included with six 6 dart clip as well as 6 zombie strike darts which you can load into the Nerf slingfire magazine. It also has a lever action blasting and you can get to cock it in two ways. You can either flick it in order to cock it using one hand or swing the lever. On top of that, you will have a user manual with instructions you will need to use it.

How do you use a Nerf slingfire?

Using this gun is quite easy and you can do so by following these few steps.

How do you modify a nerf slingfire?

You can check out the latest price of this awesome
Nerf Zombie Strike Slingfire in here.

How do you fix a nerf gun slingfire?

When the jam door gets loose and opens up unexpectedly, you will have to either tighten the screws or you find a small piece of paper and fit it behind the hinge at the jam door. For the case of your gun not firing, it may be due to a misaligned plunger.  You will have to open the gun and re position the plunger in order for the air to flow straight into the barrel.

If you think of zombie mass extermination this  nerf zombie strike slingfire can be your great option. This Nerf gun is one of the high quality toys that are safe for kids of all ages. Even the adults loved it for it’s look and performance. I highly recommend you to have this in your Nerf battle. Good luck.