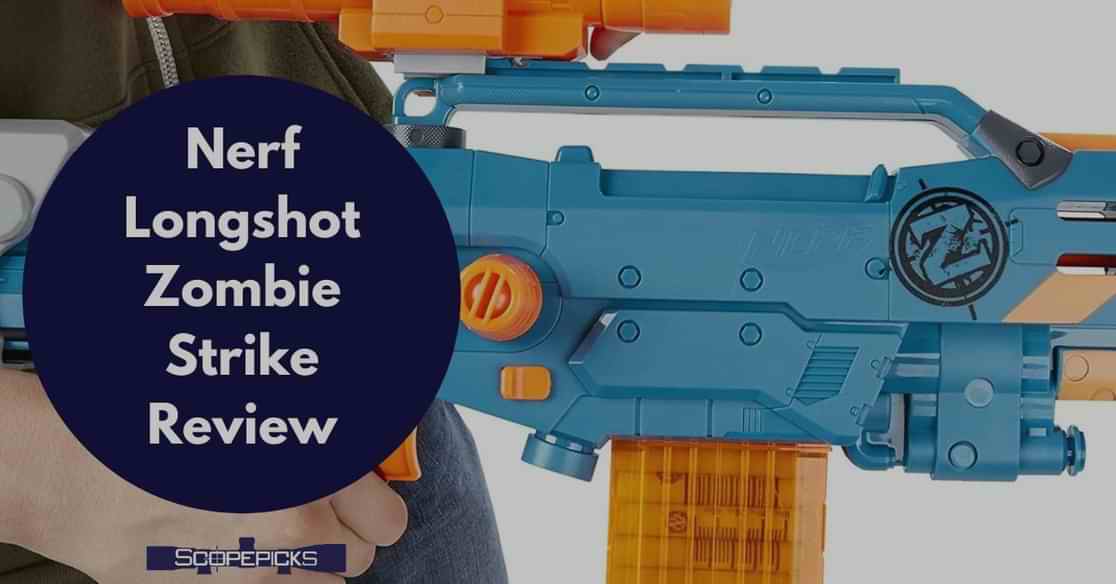 Nerf Longshot Zombie Strike Review – All You Need To Know

Furthermore, it does not have the collapsible bipod, the original version had a blaster barrel mounted on the front side. Additional features include a larger 12 dart clip better than the 6 dart clip initially in the Nerf longshot zombie strike CS-6.

The nerf zombie longshot blaster is bold and looks more exciting. According to some customer tastes, the look on the photos is not the same as those that are on the zombie riffle. The aesthetic makes over is greatly worked on. It is built using durable plastic material.

The rifle is easy to use. It is light in weight for efficiency while moving. A well-balanced piece for effective use. And, the butt is easily foldable. The scope is made using plastic material which makes it lose a certain degree of accuracy. Glass lenses would function better when used.

The performance of the nerf sniper zombie strike is variable. It can shoot up to 58 feet. Sometimes you can experience very poor shots of about 10 feet. On other occasions, the darts can move like a helicopter rotter blade resulting in short distance travel.

Moreover, the darts move at an average velocity of 45 feet- per- second that is not so pleasing but still a good one. Firing consistently is hard to be achieved. The riffle may jam as a result of clogging of the darts in the barrel making firing messy. These drawbacks are mainly inherited from the previous CS- 6.

It’s easy to say that jamming of the nerf zombie sniper rifle encountered makes the shooting of this blaster rifle somewhat derailing. Firing all the 12 darts without errors, jamming or clogging will require your patience. So, this eliminates the idea of fast and continuous shooting.

It is possible to use other models of darts with the CS-12. The elite zombie strikes are compatible to increase its reliability. Despite the hindrances, when used well your family will enjoy the shooting experience.

If you are are looking for sniper rifle for fun or for your kid then you can check out the list in here: Best Nerf Sniper

Battle with the Zombie

With the zombie threat that increases daily, you need nerf guns sniper zombie strike / blaster to keep yourself safe. It is still rated among the best-scoped zombie strike rifles for long-range shooting.

Changing the magazines is easy and the darts align themselves in the barrel easily. In addition, the scope ensures an accurate shot and proper utilization of ammo (darts) which is suitable for mid- long-range shooting.

The closer you are to the zombies the higher the risk of getting infected. With a longer shooting range, the risk is minimized. Rated among best Nerf sniper zombie riffle. The Nerf zombie strike has a better performance in hunting down zombies. Nerf rival and mega riffles could also do the job of eliminating zombies but they do not amount to the superiority of the zombie longshot rifle.

When the need to eliminate zombies increases, it turns out to be a matter of survival or infection. To curb the pandemic Nerf company developed a great tool to eliminate the zombies. It was initially developed for the Zombie Strike Task Force to prevent the spread of the zombies.

Easy to attach the scope onto the top of the long shot zombie rifle to ensure accuracy for easy target elimination just at the slightest pull of the trigger.

We decided to highlight some of the issues that cause jamming of the rifle. Some of them include;

In some instances, the magazine has a slow load speed that hinders the fast loading of the darts into the barrel. The darts crush when it occurs. These occurrences will happen to any type of darts in use.

The nerf gun sniper zombie is suitable for use for persons above age 8. However, if you are in a position to train your child below age 8 to shoot accurately then it will work perfectly.

Are you passionate to eradicate zombies? Join the rest of the forces with a similar motive. Carry along with your Nerf zombie longshot rifle. It is well known that if a high-quality product is not handled with max care then the product will get damaged after a while.

The nerf longshot zombie rifle also requires to handle and maintained carefully. This will ensure that it gives you a long term service full of fun while eliminating zombies easily at a slight pull of the trigger. It Durable to enhance performance and longevity.

Nerf zombie longshot review is well researched to give you correct information stating the drawbacks as well as its numerous advantages. Previous models of the Nerf zombie rifles are designed for survival purposes.

This bad boy, the Longshot zombie rifle CS-12 is designed to destroy, to eradicate the zombie epidemic. This rifle is worth purchasing, the additional features are overwhelming.

You can check out the latest price of this awesome
Nerf Longshot Zombie Strike in here.

Final thoughts on the above review, if you don’t manage to read the review don’t miss the conclusion. I will summarize some important features to take home and to help you decide to purchase the zombie rifle.

The scope is easy to mount. Challenges that might be there in focus and accuracy do not prevent it from rating among the best. Greatly aids in ensuring clean accurate shots. It does not have a limitation on the age of possible users. Provided you have the skills you are good to go. Easy load up mechanism for fast magazine changeovers to ensure you keep up with the shooting speed.

The nerf zombie longshot mod has a nice shape that makes you feel like a soldier in the battlefront fighting to protect his nation against enemies in this case zombies. A large magazine to hold up to 12 darts. It is suited for mid and long-range zombie elimination keeping you at a safe distance to avoid getting infected. You will feel the value of your money.